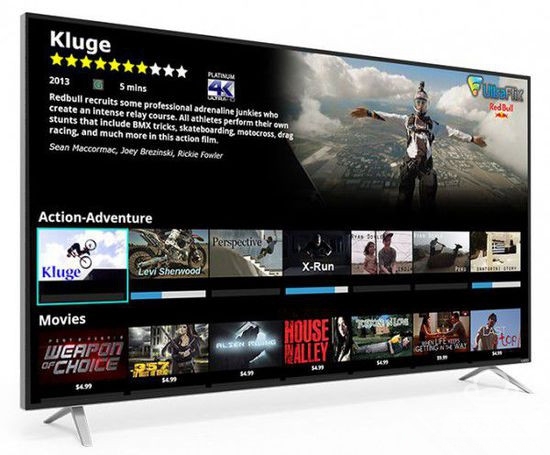 It is estimated that in 2015, the scale of information consumption will exceed RMB 3 trillion, driving more than 1.2 trillion yuan of new output in related industries; the new type of information-based Internet consumption will reach 2.4 trillion yuan, an average annual increase of more than 30%. Under the current development pattern of the new normal, smart TV is becoming younger and younger and becomes the center of an open family life platform.
From the TV itself, although it is a "bone-sized" consumer electronics product, it is still young. As the closest consumer electronic product to people's family life, TV has never stopped the pace of innovation: from the flat, 3D, smart, 4K to today's home smart terminals and portals, there are not many industries have experienced more than 30 years of development, or Still young; the current television graft on smart and the Internet will create more possibilities, will be more exciting, and the prospect is endless.

There was a period of time when people thought that the emergence of personal terminals such as smart phones and tablet computers had made televisions increasingly marginalized. However, with the arrival of the era of television intelligentization and interconnection, this industry has added new vitality. Home terminals based on smart TVs have become an important carrier for home entertainment and information control. The future will not only disappear, but on the Internet. It becomes more powerful under the armed forces. In this process, the television industry will start a new journey, including the integration process of content and channel broadcast, the process of multi-screen interaction and family socialization, the analysis of user behavior based on big data, and accurate content, advertisements, and application recommendations. The process, as well as the development of multi-functional and business models of television from single video playback to information browsing, game entertainment, full education, online shopping, etc.

From the TV industry, there will be "dinosaur-scale" behemoths in the development process, but ultimately it will be based on cross-border cooperation and open and shared ecological chain innovation. The connotation and extension of the TV industry have undergone revolutionary changes. For example, the products consumed by users are no longer limited to audio and video content, but are extended to e-commerce, games and other pan-entertainment and pan-family products; business models also appear free of charge. + Variety of value-added services, users watching broadcast content is just the beginning of value realization, and so on. In this process, different companies in the industry have made continuous breakthroughs through self-breakthrough innovations, as well as vertical and horizontal linkages between different companies and even ecological chain innovations. Exclude individual companies from relying on their own strengths to create a relatively complete, self-directed, relatively closed-end system and become an industry giant. However, Internet + this thinking principle will bring a fundamental transformation of business thinking to the television industry: users are the center, cross-border cooperation in the ecological chain can ultimately promote consumption upgrades, leading the industry transition. In this new era, we no longer believe in the traditional â€œlaw of the jungleâ€ as a strong, strong food, and it is more advocating the â€œlaw of the sky.â€ All companies in the same sky, the dimensions of survival do not completely coincide. Faced with a considerable piece of cake in the smart TV industry, this is a unique industry that involves multiple stakeholders. It requires the participation of licensees, content providers, hardware manufacturers, and internet giants to make a difference.

In the entire smart home industry, smart hardware will continue to be produced by "killer" single products or applications, but television will certainly be a platform-level smart product. With the official commercial use of 4G in China in 2014, networking (internet and mobile Internet) consumer electronics products and revolutions are in full swing in China. In 2015, many smart life devices are shining brightly, smart watches, wristbands, smart glasses, smart running shoes. The various functional products point to different subdivision scenarios and extend the dimensions of smart life. A single "killer" smart life device is very likely to occur, this will be a good thing, it can achieve high-frequency single point of user breakthroughs, the formation of the use of habits; with popular once portable digital cameras and MP3 in the smart phone this platform-level product popularity After that, as soon as it disappears, a single smart hardware must be docked with the platform before it can be durable. For the whole smart home industry, there will not be much platform industry, and TV must be one of them.

As a home networking intelligent terminal platform, TV should have its historical inevitability. Because television has the attributes of family social networking, there are properties of networking, and there are also business model extension properties. With the development of triple play, televisions, mobile phones, mobile terminals, and computers must be built on top of multi-screen interaction. The sharing and integration of information between various terminals becomes an inevitable trend; at the same time, the convergence of various terminals Sharing with information is not only content sharing, but also sharing in terms of processing capabilities and interoperability. TV terminals have unparalleled advantages in terms of hardware platforms, system access, and ease of operation.

New industry features have brought new participants. Under the dream of the living room of the Internet, all links, including terminal manufacturers, technology vendors and even content providers, have sought to become the main operators and have become the main players in the platform's entrance. This industry is large enough to accommodate more of our imagination, can achieve more industry chain connection, technology transformation, business opportunities, foster and stimulate China's information consumer market, and further promote the transformation and upgrading of China's electronic information industry.


This content is copyrighted exclusively by SofaNet. Welcome manufacturers to further exchanges and cooperation with us to create more in-depth product reports.

A rice cooker or rice steamer is an automated kitchen appliance designed to boil or steam rice. It consists of a heat source, a cooking bowl, and a thermostat. The thermostat measures the temperature of the cooking bowl and controls the heat. Complex rice cookers may have many more sensors and other components, and may be multipurpose.  Cooking rice has traditionally required constant attention to ensure the rice was cooked properly, and not burnt. Electric rice cookers automate the process by mechanically or electronically controlling heat and timing, thus freeing up a heating element on the cooking range that had to be otherwise occupied for rice cooking. Although the rice cooker does not necessarily speed up the cooking process, with an electric rice cooker the cook's involvement in cooking rice is reduced to simply measuring the rice, preparing the rice properly and using the correct amount of water. Once the rice cooker is set to cook, the rice will be cooked with no further attention.

For modern home rice cookers, the smallest single-person model cooks 1 rice cup (180 ml), whereas large models can cook 10 cups. Commercial models can cook 20 or more cups. As a possible source of confusion, model specifications and names may list either cooked or uncooked capacity. Rice roughly doubles in size during cooking; therefore, a 10 cup (uncooked) rice cooker can produce up to 20 cups of cooked rice. The prices vary greatly, depending on the capacity, features, materials used, and the country of origin.

The majority of modern electric rice cookers are equipped with a stay-warm or keep-warm feature, which keeps the rice at an optimal temperature for serving without over-cooking it. Some gas cookers also have electric stay-warm mechanism. However, the usefulness of this feature degrades over time, a microwave may be more energy efficient or better suited to reheat rice that will sit longer than four hours.

Most modern rice cookers use aluminium for the inner cooking bowl. There are some models that use stainless steel instead of aluminium. Various other materials, such as copper, pure carbon, ceramic, and diamond powder coating, may be used for higher heat conductivity or better taste.

The pressure-cooking models can raise the water's boiling point higher, e.g., from 100 Â°C at 1.0 atm up to about 110 Â°C at 1.4 atm, which speeds cooking. The pressure-cooking models can also be used in high altitude areas, where the boiling temperature is below 100 Celsius. Pressure cookers are also suitable for cooking brown rice (which contains oils and bran fiber that cook differently from pure white rice starch). Some pressure rice cookers have a varying pressure control mechanism (named the "dual-pressure" method) that creates repeated pressure/release cycles during the cooking.

There also exist mechanisms to collect and return the boiled over liquid to the inner rice bowl.

Many cookers now have microprocessor-controlled cooking cycles, which are often used to adjust for rice and cooking type.

Brown rice generally needs longer cooking times than white rice, unless it is broken or flourblasted (which perforates the bran).

African rice, Oryza glaberrima, is an entirely separate species, but can be cooked in the same way. Zizania is not even in the same genus, although it is often called a rice (or "water oats"); it, too, can also be cooked in a rice cooker.

A rice cooker can be used to cook many boiled or steamed granular foods, such as pot barley, bulgar wheat, and dal. Provided the ingredients have similar cooking times, a rice cooker can cook mixtures such as khichdi. Some rice cookers can be used as automated couscoussiers, cooking couscous and a stew simultaneously.