A few days ago, a message at the Frankfurt Motor Show gave us some hope for gesture control.

The exhibitor's parts supplier Delphi showed its own gesture control technology. By using the camera to transmit and receive infrared light, the system can judge the gesture operation from the change of reflected light. At present, it is determined that the car company equipped with this technology and mass production is BMW. On the new 7 series listed on the domestic market on October 24 this year, buyers can enjoy this futuristic human-computer interaction technology.

In the view of car cloud, those technologies that are not necessarily mass-produced often point to new possibilities. In the existing case of gesture control, Car Cloud has found three interesting cases. Jaguar Land Rover is the most sci-fi, Ford has shown a high degree of precision, and Microsoft's project is light and fun.

This is a news not far from us. It turns out that Jaguar Land Rover invested in a very young British startup, Ultrahapatics. The startupâ€™s gesture-touch technology called ULT003 Mid-air touch is very effective. Cool. The most interesting thing is that when you make touch operations in the air, your hands can feel tactile feedback similar to manipulating physical buttons.

The technical principle behind this is that there will be an ultrasonic transmitting device in the touch area. By varying the air pressure, a few high-voltage points of sound waves can be gathered at a specific position to generate a â€œtouchable, invisibleâ€ interface. As long as the hand moves within a valid range, the device will track the change in your hand position and â€œfabricateâ€ a virtual three-dimensional object in a suitable position. It can also be a â€œknobâ€ or â€œbuttonâ€. 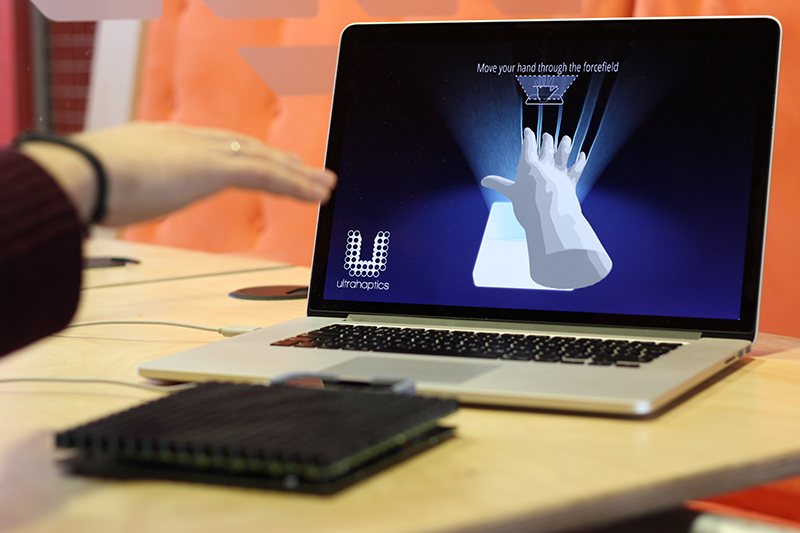 Compared with the general touch operation, the button will move synchronously according to the position of your hand, without the need to look at the screen to find the touch point in the traditional gesture control. Moreover, the user can obtain specific information by touching, and the hand can truly feel the button force of the button and the texture of the touch to the plane, and the judgment of the operation effect is determined by the actual tactile feedback.

The whole process of interaction is like reading a novel intently and carefully, taking the water from the table and drinking it, and the sight does not need to be removed from the book, and the cup will "run" to the hand. There have been many people who have questioned whether gestures and touches should still pay attention to whether the touch position is in the proper range. If the operation is successful, you should also glance at the screen to confirm. Ultrashapatics' "hands-on" technology has eliminated these two concerns at one time.

The gesture control of Ford and Intel is part of the project called Mobii. In principle, the camera is used to recognize gestures. The car cloud has been introduced in the earlier article, using structured light technology. In simple terms, it is still the principle of infrared light reflection to determine the position, contour and motion of the object, but this kind of light source has the characteristics of point line surface, especially good at 3D reconstruction of a stereo image.

In the function presentation, the gesture control is combined with a simple voice command combination, and the gesture can be used to adjust the temperature or switch the sunroof while driving. This feature does not have much in the above video display, not technical limitations or bottlenecks, but because structured light technology appears to be somewhat overkill in gesture control, and Ford and Intel are targeting more complex facial recognition.

The face of the driver's seat is scanned by the camera in front of the driver to determine whether it is the certified owner and whether or not the vehicle system is activated. When the stranger makes further operations, the owner's mobile phone will receive a positive picture of the insider, which can be authorized on the mobile phone. Drivers who have already been certified can also activate the personalization settings saved in the system, in addition to a range of functions such as turning on the car system.

From the display of facial recognition technology, we can also discover the two advantages of this technology from the side. First, the way to verify your identity with your face can prove the level of sophistication of this technology. After all, the "seeing" person's face facial features and the clearing of the hand shape change, reached a higher level of precision. Secondly, the data shows that if the system detects that there are other passengers in the car, it will close the page that reveals the privacy of the user, only the navigation interface is exposed. To some extent, the system used for identification can support multi-threaded jobs.

Microsoft's thinking about gesture control looks very interesting. The Internet company once considered introducing gesture control into the interior of the car, using only the built-in camera on our phone. Compared with the first two cases, this is a â€œpost-installationâ€ scheme for the interior environment.

This trend was discovered because of a patent application from Microsoft in 2012. In the patent content, three researchers built a gesture control system for the car entertainment information system. But these control actions are completely different from our usual raising, sliding, and rotating. They are like the picture below. 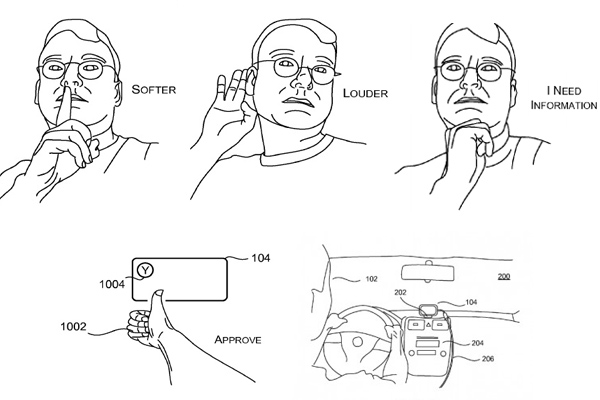 The index finger against the lips means that the volume of the mobile phone is lowered, and the hand is turned into a trumpet to indicate that the phone is used to make a call. A similar thinking chin movement means "I want to retrieve information", and the like action represents "agree".

When using this system, you need to put the smartphone on the top of the dashboard and use the built-in imagination of the phone to capture the gestures and posture movements of the car. It is reasonable to speculate that the function behind this function should be Image recognition technology. At the software level, the three researchers set the system to use gesture control with speech recognition, which is more common in human-computer interaction in the car.

This gesture control solution has not yet seen the landing case, you still can't see these strange control gestures in the car. The information also shows that in the project of Microsoft's concept car Smart Insect, which was co-operated with Toyota in 2013, the pre-installed version of the gesture control function has been implemented with the front-mounted camera. All gestures resume normal lifts and are used to operate secondary control functions in the car, such as entertainment information systems, navigation or dialing a phone connected to the car.

Why is gesture control delayed?

The thoughts of the above three cases are relatively unpredictable, and for the final commercialization time, each family did not give a definite date. The news of Jaguar Land Rover's investment in Ultrahapatics took place this month. Ford and Toyota's technology show has been wavering as early as a few years ago, but the latest information has not been seen. For quite some time, these three technologies have remained at the stage of â€œcan only be seen and cannot be boughtâ€.

This product is non-sterile
It can be used in hospital, just hospital staff need to do sterilization before using;
It can effectively resist the penetration of bacteria, viruses, alcohol, blood, body fluids, air dust particles, can effectively
protect wearer from the theat of infection.