Next Generation Network (NGN) has become the development direction of communication networks. VoIP is a hot spot in NGN research and has a broad application market. VoIP technology can transmit voice services over packet-switched networks to meet the demand for voice services on data communication networks. Currently, there are two call signaling and control standards in the IP telephony field: the ITU-T H.323 protocol and the 1 ETF SIP protocol. The H.323 protocol has been matured since its early submission, and the SIP protocol proposed by the IETF has emerged as a trend due to its simple and flexible technical features.

The mainstream technical standards for WLAN have evolved from 802.11 to 802.11a/b/g, and the access rate has grown from the highest l Mbps to 54 Mbps. The technology is mature, the cost is low, and the penetration rate is rapidly increasing, which caters to the development requirements of portable terminals. It is supported by a large number of international manufacturers and widely recognized by the market. However, 802.11a/b/g technology only provides high-speed data access services and cannot provide voice services. Therefore, it is necessary to adopt VoIP technology based on the data service to develop a wireless VoIP phone (VOWiFi) to accommodate embedded communication. The increasingly widespread reality of network device applications. The software and hardware platform for implementing VoWiFi can adopt the most popular embedded development platform and open source Linux operating system. Based on the above technology, an embedded VoWiFi telephone terminal can be constructed, which has important application value.

An embedded VoWiFi phone is a device that can communicate over the 802.11a/b/g wireless LAN. In order to implement telephone communication on 802.1la/b/g, VoIP technology must be adopted, and the VoIP standard of this system can select a more flexible SIP protocol. In order to realize various communication protocols and complete various control and management tasks to meet the needs of further development in the future, an embedded system based on a microcontroller is required. In order to improve the flexibility of hardware design and the portability of software code between platforms, the design of the system hardware and software adopts a modular approach. In the hardware, the system is divided into several functional units such as Ethernet interface, USB wireless network card interface, audio interface, serial interface; in software, the embedded operating system is used to separate the underlying hardware platform and the upper layer application, and the terminal system is adopted. The module division and interface definition between modules effectively separate the correlation between modules, so that each module can be developed at the same time to improve development efficiency.

The technical solution of VoWiFi phone hardware is shown in Figure 1. The ARM9 processor is the core of the entire terminal, including 802.11b/g wireless modules, voice signal processing modules, keyboards and LCD circuits. The ARM embedded system is the core of VoWiFi telephony control and management. It is responsible for the operation of the operating system, the management and allocation of resources, the processing of information data and the communication with external expansion units, and the interface and communication with each module, TCP/ The operation of the IP protocol and the SIP protocol. Taking into account various factors, the system uses the ARM9 microcontroller chip EP9302. In order to enable the system to support multi-tasking, making program development easier and easier to maintain, and improving system stability and reliability, the embedded operating system Linux is adopted. 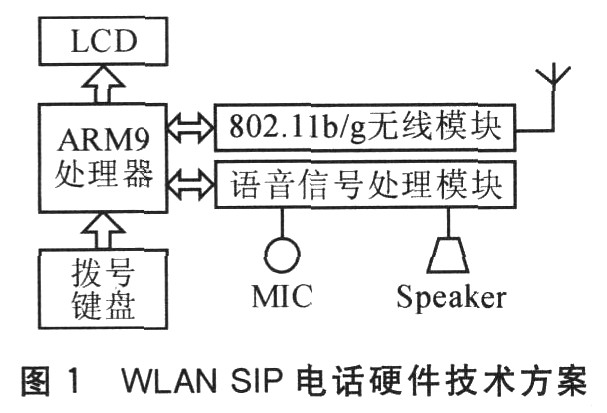 Inside the ARM9 development board contains a USB2.O interface controller, the interface circuit shown in Figure 2. There are 3 LISB interfaces (2 Hosts and 1 Device), and the gate control is performed by selecting the switch SW800. The 74HC08 acts as a four-input AND gate logic circuit that is responsible for the logical combination of control signals. This interface is used to connect an external device of the USB interface. 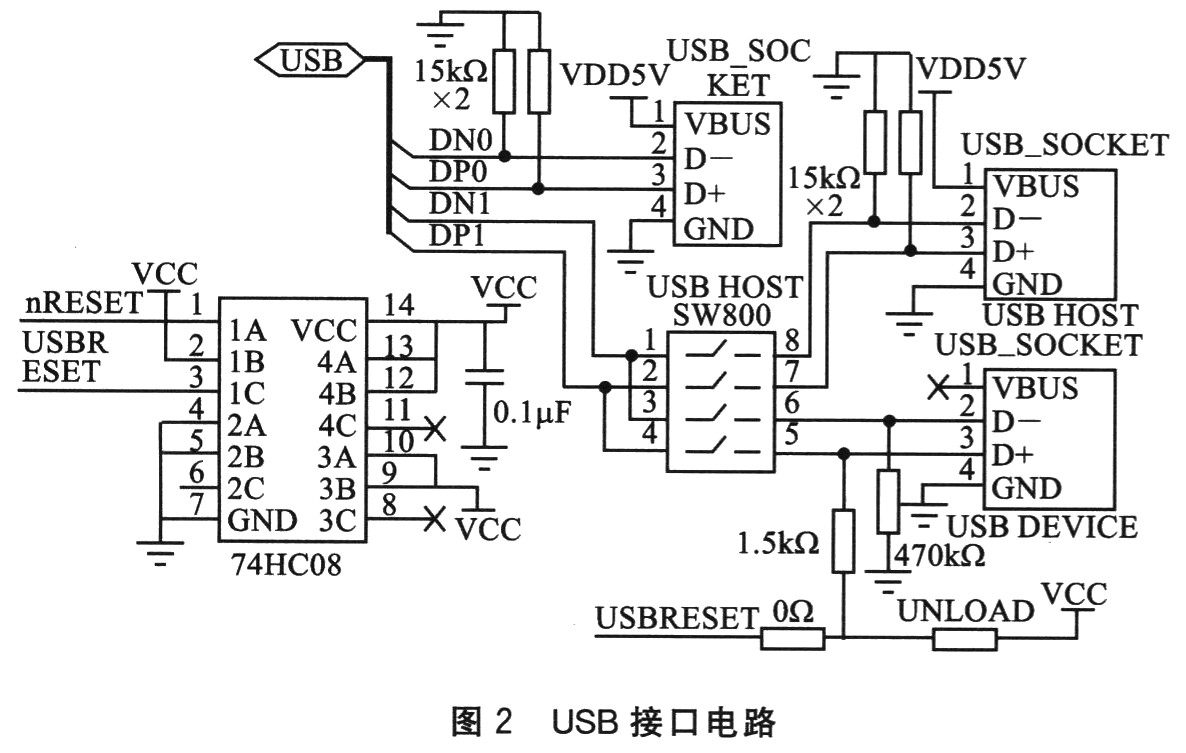 LCD display and 4Ã—4 keyboard are used for human-machine interface, and various man-machine operations are realized under the support of ARM embedded system. Considering that LCD displays are mainly used for numbers and various status indicator displays, a 128Ã—64 graphic dot matrix LCD module with backlight is used.

The software structure of the embedded WLAN SIP phone terminal is shown in Figure 4. Specifically, the following software is required.

It provides the foundation and development platform of embedded application software. It has API system calls that package CPU time, interrupt, I/O, timer and other resources and leave it to the user standard. The task is scheduled reasonably to ensure real-time and reliable. Sex and other functions. Wireless network card drivers, TCP/IP protocol stacks, liquid crystal displays, and keyboard drivers are all operating system modules.

The SIP protocol is mainly used for call control, including the establishment, maintenance, and termination of calls, and dynamically adjusts and modifies related attributes based on call progress. The related operations of the SIP protocol include: sending and receiving SIP messages, generating and analyzing messages, saving and converting state machines, managing SIP sessions, running SIP transaction mechanisms, constructing, parsing, and media negotiation of SDP messages. , as well as the registration of the terminal and other functions.

The voice processing software is used to implement complete voice interaction between users, and can be further divided into:

1 voice processing module. Responsible for the collection, encoding and decoding of voice data, and the use of G.711 voice coding technology used in circuit telephone switching networks around the world.

2 real-time media transmission module. Complete RTP encapsulation and decomposition of data packets, as well as data packet transmission and reception. The SIP protocol and voice processing are two separate processes. After the SIP session is established, the media stream is connected, the media stream is disconnected, and the SIP session is removed.

Hardware device drivers include wireless network cards, keyboards, and LCD drivers. Compile the driver into a loadable module of the kernel and link it to the kernel, generate a new kernel that can run on the target board, and then burn the kernel into the Flash of the target board to make them work.

The terminal application implements initialization of the terminal program, creates a thread, manages the information of each module in the program, allocates resources for them, and is responsible for controlling and managing the communication of other modules and communication between the modules globally through interaction with the user; The operating platform of the SIP user agent implements the functions of call origination, call response, and call termination of the entire system.

The protocol used to secure real-time data transmission throughout the session is the RTP protocol. The RTP algorithm is not implemented as a separate network layer, but as part of the application code. The real-time transport control protocol RTCP and RTP together provide flow control and congestion control services.

The embedded VOWiFi telephone terminal, wireless AP and PC-based SIP softphone are used as experimental environments. The working process of the VoWiFi terminal is as follows: the audio signal is first sent to the audio processing unit through the MIC, and the analog/digital conversion of the sound signal is completed, and then the data is encapsulated by the RTP protocol, the UDP protocol, and the IP protocol from top to bottom through voice codec. The ARM9 processor reads the encapsulated data into the off-chip cache unit SDRAM by the DMA method through the I2S bus. When the opened buffer area is full, the wireless network card driver is run, and the IP packet is sent out through the wireless network card. After receiving the sent data, the SIP softphone running on the PC takes out the audio data in the IP packet through the application layer software, then calls the PC sound card driver, and sends the data to the sound card to restore the analog voice. The reverse direction of data transfer is similar, except that the data is sent by a client program running TCP/IP on the host.

After testing the functions such as registration, calling, canceling call, and voice communication of the terminal, the terminal can perform good control on the SIP signaling process, thereby implementing basic functions such as registration and calling. In terms of voice transmission, the terminal can perform real-time voice transmission with the called RTP channel, and the voice quality is better in the LAN environment, and the delay is small; in terms of interworking, in addition to being able to communicate with another terminal, it can also be connected with Linphone, X. Terminals such as lite establish call and voice communication with good interoperability.

Based on the introduction of VoIP principle, the software and hardware of embedded VoWiFi telephone terminal based on ARM9 platform are designed. The design uses the current most popular embedded development platform and open source Linux operating system to implement VoIP voice call function on the wireless LAN. The innovation lies in: VoIP technology is used to implement VoWiFi telephone terminal voice call function on 802.11a/b/g wireless local area network (WLAN).